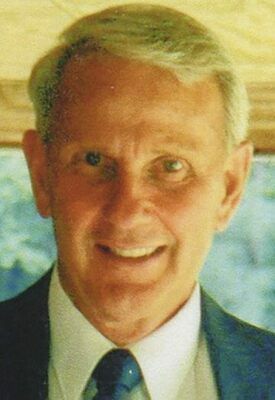 Richard Bennett Watkins, 86, of Big Stone Gap, Virginia passed away peacefully on Monday, October 10, 2022, at Holston Valley Medical Center. He was born on December 21, 1935, in Rockingham, NC and raised in Kannapolis, NC to Thelma and Charles Watkins.
Richard began his lifelong railroad career with Southern Railway, which led to many job transfers throughout the South. In 1973, he settled in Big Stone Gap where he started his own railroad contracting business, D&E Railroad Contractors. Later in life, he became the owner of Robinette Steel and Scrap Company. Richard was an active member of the community where he served as President of The Gap Corporation and was one of the local leaders who raised money to restore the old Southern Railway Interstate 101 Train Car, and a member and past president of the Big Stone Gap Kiwanis Club.
Richard was a devoted husband, father, grandfather, great grandfather, uncle, brother, and friend to all who knew him. His infectious personality, sense of humor and his positive outlook made him a pleasure to be around. He traveled extensively throughout his life, including an around the world trip and touring all the contiguous US states in his RV Camper. He enjoyed spending time at his house on Boone Lake, at Myrtle Beach, and at his “Rocky Holler” Farm. But his greatest joy was camping with his family; it just wasn’t summer without a camping trip! He loved a good card game, especially his favorite, “99,” which he passed down to three generations. The world was so much brighter with him in it, and he will be deeply missed by all who knew him.
Richard was preceded in death by his parents, brother Wallace Watkins, sister Sue Braden and daughter Karen Glass. Those left to cherish his memory are his wife of 38 years Cindy, sister Kathy Burgess (Connie), daughters Lynne Peaks (Tony), Sharon Browder (Henry), Lisa Daves (Bill), stepson Chad Dickenson (Susan), 8 grandchildren and 5 great grandchildren, and his dear brothers-in-law and sisters-in-law.
Richard spent the last two years of his life at The Blake in Kingsport, Tennessee. We would like to thank the many invaluable caregivers who became like family to him.
A memorial service will be held on Monday, October 17, 2022, at Gilliam Funeral Home in Big Stone Gap, Virginia. The family will receive friends from 5:00 PM - 6:00PM with a memorial service immediately following with the Rev. Nate Ware and Rev. Ronnie Mutter officiating.
Memorial contributions may be made to https://tischbraintumorcenter.duke.edu/ in memory of Richard’s daughter, Karen Glass.
Please visit https://www.gilliamfuneralhome.com/ to leave your on-line condolences for the family.
Gilliam Funeral Home and Crematory is honored to serve the Watkins family.