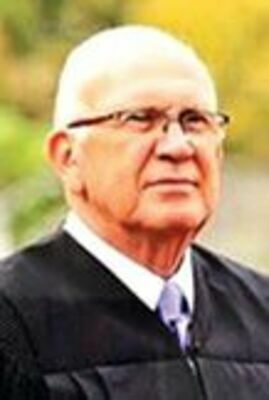 The Honorable Richard Larry Lewis, 77, of Jonesville, Virginia passed away from this life into eternal life on the 2nd of June, 2021.

Judge Lewis, a lifelong Southwest Virginia resident, graduated from Pennington High School in 1962, followed by Clinch Valley College in 1965. He went on to obtain a B.S. in Social Work from ETSU in 1967. He served in the U.S. Army from 1967 to 1969 where he was honorably discharged. Judge Lewis received his Juris Doctor degree from William and Mary Law School in 1973 and returned to Lee County where he practiced law for 12 years; over five years of that time was spent serving as Commonwealth’s Attorney for Lee County. Judge Lewis married Linda Moore Lewis on March 21st, 1981, after many years of trying to catch her attention. In March of 1985, he was appointed General District Judge for Lee, Wise, and Scott Counties, and served honorably in that position for over 29 years. He served on the Committee of District Courts for 16 years and presided as president of the Association of District Courts for two years. He also served on the Advisory Board at Appalachian School of Law.

Judge Lewis was passionate about cars and good music. He could tell you the make, model, and Kelly Blue Book price of any car, new or old. When his daughters were younger, the trio would spend many summer afternoons driving the backroads of Lee County listening to The Beatles, Eagles, and Creedence Clearwater Revival, just to name a few, while Larry eloquently articulated the fond memories of his own youth, family and life experiences. His daughters have carried his love of music throughout their own lives as well. He also enjoyed traveling internationally with his wife, where they made many lifelong friends. He equally enjoyed reading the daily newspaper on his front porch in Jonesville and visiting friends. Most of all, he loved spending time with his family. He was a Christian and a member of the Jonesville First United Methodist Church. He loved his church family and served as an usher for several years.

Judge Lewis is survived by his wife of 40 years, Linda and their two daughters: Ashley Pappas, a Director of Pharmacy in Chapel Hill, NC; and Candace Lewis, a High School Librarian and Technology Specialist in Raleigh, NC. He is also survived by Ashley’s husband, Phil, and their twin daughters, James and Sawyer, as well as his mother-in-law, Fern Moore and several nieces and nephews. He was preceded in death by his parents, Moran and Edith Lewis, grandparents John and Hattie Lewis, and Denver and Lola Robbins, brother Robert G. Lewis, and sister, Geneva Lewis Elkins.

Online condolences and guest book are available at www.sturgillfuneralhome.com.

Mullins-Sturgill Funeral Home of Pennington Gap is in charge of the arrangements.