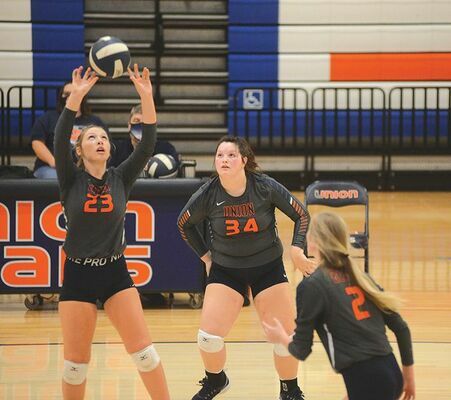 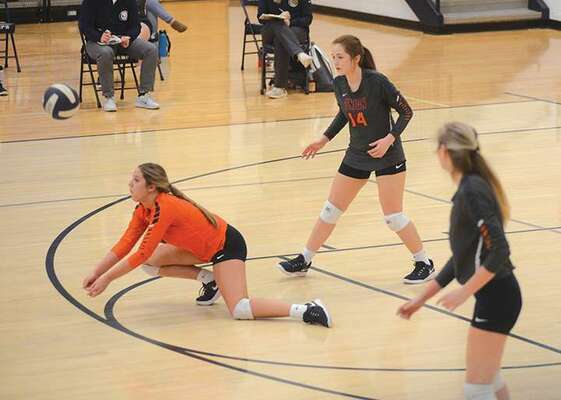 Gracie Gibson lays it out to get under this serve Tuesday. PHOTO BY KELLEY PEARSON

The Lady Bears’ Isabella Blagg focuses on getting the perfect return. PHOTO BY KELLEY PEARSON 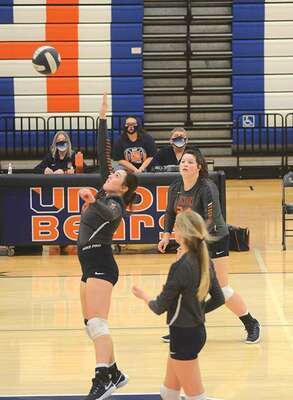 Madi Varner resets for the kill as Union upended Ridgeview. PHOTO BY KELLEY PEARSON
Previous Next

Considering both teams have now finished the regular season at 4-8, won against and lost to the same teams and finished tied for fourth in the region, a playoff game must be played at a neutral site. It will take place next week as Mountain 7 officials announced earlier in the season there would be no district tournament. At the time of publishing, neither the date nor location had been announced.

In the first two sets, both teams battled it out ‘a la the first game of the season, which went five sets and lasted over two hours. Just as in the game at Ridgeview, the teams split with the Lady Bears taking the first set with strong serving stretches from Brooke Bailey and Isabella Blagg and the Lady ‘Pack storming back to own set two.

The third set was also highly contested with the median stretch of points being ties. The Lady Wolfpack went ahead 20-18 on two blocks in a row from Hailey Sutherland forcing Union to take a time out.

Lady Bear head coach Kim Moore must have said the right thing in the huddle as Union would score four straight points to go ahead 22-20 on their way to victory.

The fourth set was all Lady Bears as strong play from the front linet put Union ahead 17-5 on their way to the 25-9 triumph.

“I’m just happy for my girls right now,” Moore said. “To see a spark in them after the kind of year that we’ve had, I’m just proud of them.”

The shortened season has been rough for Union. The Lady Bears were the Region 2D champs last year, but this year’s young team looks a little bit different. Bailey is back as setter for the Lady Bears, while Blagg shifted up from defensive specialist to front-line hitter. The team has no seniors.

“They’re still learning to keep momentum and keep people down. We’re just still learning how to manage the emotion and energy in the game. I think tonight, we kind of got a sense of that,” Moore said.

Blagg and Bailey stuffed the score sheet as Blagg had 20 kills, 27 digs and four aces while Bailey managed 39 assists, two kills, 18 digs and one ace.

Ridgeview got strong showings from Haley Mullins with 11 kills and five blocks. Alyssa Price had 15 assists and 13 service points for the Lady Wolfpack.

Head coach Holly Fleming will return to the drawing board to prepare for a third meeting this season with the Lady Bears.

“I don’t know what happened tonight,” Fleming said. “We played well in spurts, but consistently, they outworked us tonight. They’re well-coached and this is a good program all around. We knew what we should expect over here.”

“I think a lot of it is mental toughness. We’re working on it and getting better at it. This was tough. We’ve got to learn how to win. We have to play to win, not just to not lose. I’m excited to get a third chance. We’ve just got to get our minds right,” Fleming said.

Union suffers first loss of the season to Abingdon

A memory of The Wildcat quilting ladies