by BY HOWARD CUMMINS COLUMNIST 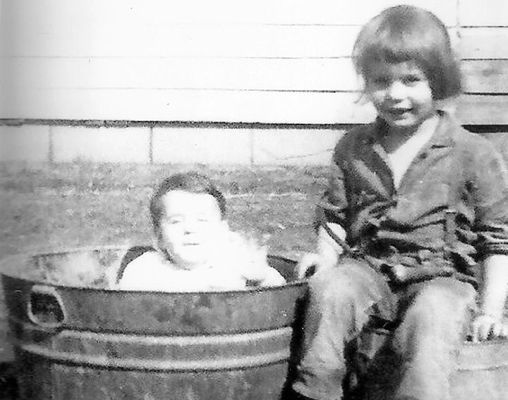 There was a time when many Americans enjoyed the luxury of a bath only on a given date, usually on Saturday night. A hot bath was a thing of luxury, and it was usually observed in preparation for a special occasion. Our forefathers did not necessarily ignore good health by enjoying a daily hot bath, it was a matter of making do with what was available, and without the benefit of fancy, trendy, expensive fixtures. One bath per week was a limit since there were so many preparations.

The history of body bathing is both simple and elaborate. A wash tub, hot water , and homemade lie soap does the job as well as an elaborate porcelain tub that holds another individual. For our early settlers, the task of bathing was not a simple procedure, and it had to be well-planned.

Step one: Remove the all-purpose dented metal tub from the smoke house and give it a cleaning from its last use, which could be everything from removing gardening debris, washing the dog, or doing household laundry.
Step two: Carry a quantity of water from the water source. If the home was modern enough to have a well it was frequently controlled by a hand pump that was commonly located outside the house. Depending upon the size of the wash tub this could involve several trips carrying heavy buckets of water.

Step three: Heat a portion of the bath water. This frequently was done from a hot fire using a sturdy tea kettle or a bucket, in whatever quantity was needed to warm the water for the bathing ritual.

Step four: Equip the bathing area with whatever was available for creating a soapy lather, and every family had a favorite lye soap recipe. And of course the creation of this soap was its own, separate, tedious process. It would be many years before many families had access to commercial soaps for this and other cleaning duties.

Step five: Wait your turn! If you were “low man on the totem pole”, so to speak, you might be bathing in leftover, cool water that had already serviced other family members.
During my youth one of our neighbors was quite famous for her storytelling. She had a real talent for embellishing her tales, and most would have her audience bending over in laughter. Among one of the best was a story of two sisters who had delayed bathing and dressing for hot dates with two local brothers until just before the boys were due to arrive. The family took their baths in a special little building that was equipped with a water pump and an old cook stove, but access involved crossing through the yard. As the story goes, the two young men arrived before the baths were finished and these little ladies, clad only in large bath towels, were faced with how to get into the house without being seen. They opted to take a detour through the cornfield to get to the back of the house but failed to hear their mother yelling that they needed to move “one more row over”. One more row might have made their homeward dash a little less visible!

Today we are spoiled with the easy task of cleansing our bodies. Turn on the water, light a scented candle, dump a bottle of lavender into the steaming water, lather a cake of trendy soap, and maneuver the body in a cozy position after sipping a goblet of wine and relax. Or step into a hot steaming shower for a thorough soaping and rinse. If we encounter a challenge it’s usually that the hot water heater isn’t keeping up with demand!

Ron Short featured at “Lunch on the Lawn” July 17

Lady Bears take to the track for summer workouts