Mask enforcement is a challenge 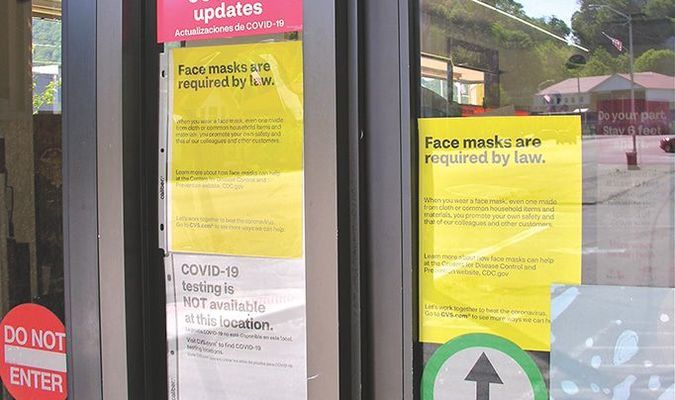 At the CVS pharmacy in Big Stone Gap, two signs at the entrance warn customers of the requirement to wear a mask. Moments before the photo was shot, a customer, not wearing a mask, exited a vehicle with Virginia plates and walked inside. JEFF LESTER PHOTO

Judging from behavior seen locally since Friday morning, enforcement of a state requirement to wear face masks in some settings could come down to this:

Do you, citizen, care more about another person’s legitimate health concerns than about your own concept of personal liberty? Or vice versa?

Friday marked the beginning of a new executive order from Gov. Ralph Northam, requiring Virginians to wear a face covering in certain indoor settings until further notice to help reduce the spread of the COVID-19 virus.

These include personal care and grooming businesses; food and drink establishments; retail stores; entertainment venues; government buildings; and public transportation facilities. The governor included exemptions when eating or drinking in a restaurant; while exercising; if you have a health condition that prevents wearing a mask; and for children younger than 10.

Here’s a snapshot of how people in Wise County and Norton were reacting to the mask rule since Friday, based on observations from several newspaper staff members:

• In most retail stores, easily half the customers were not wearing any kind of face coverings. In some stores, few or no customers wore masks.

• In several retail stores, at least some store employees were not wearing face coverings, or they were wearing them with mouths covered and noses exposed.

• At some retail stores, no signs were posted informing customers of the requirement to wear a mask or face covering. At others, there often is one relatively small sign mingled with other signs near the entrance.

• Customers in supermarkets and pharmacies seemed more willing to wear a mask than in other stores.

• When asked, some customers and some employees at local stores said they would not wear a mask because they believe the governor’s order violates their personal liberties.

When he announced the mask requirement May 26, Northam specified that police and sheriff’s departments would not be expected to take charge of enforcement. Instead, that responsibility falls to state and local health department officials.

But the executive order makes not wearing a mask in the required settings a Class 1 misdemeanor, punishable by up to a year in jail and a $2,500 fine.

A response came back from Robert Parker, state health department spokesman for the region from Roanoke west, writing on behalf of Cantrell.

Along with stating the basics of Northam’s requirement, Parker wrote: “For questions or concerns, call 1-877-ASK-VDH3. Please do NOT call the local health department or law enforcement (unless for criminal activity such as trespassing or disorderly conduct).

“VDH will take an educational approach by advising the public and businesses of the requirement.

“Virginians should do the right thing and wear a mask to help curb the spread of COVID-19 to protect public health. Continue to practice other preventative actions, such as hand washing, social distancing and disinfecting frequently-used surfaces.”

Here’s what it says about enforcement:

• Businesses can tell customers they are not allowed to enter without a face covering.

• In the case of “egregious violations,” the health department can choose to pursue a civil summons or warrant “through a judicial process prior to any potential arrest, which distinguishes this from a Class One misdemeanor through the criminal code.”

• Citizens who have a concern are advised to first talk with the business owner. “It that doesn’t work, you can call 1-877-ASK-VDH3.”

• If a business asks a customer to leave and the person refuses, “then they are likely trespassing and you may call local law enforcement.”

The combination of a possible misdemeanor charge and placing enforcement responsibility on health officials “basically made the mandate that masks be worn very difficult to enforce,” Slemp wrote.

However, under the law, health officials could go to the local magistrate and swear out warrants, and the governor could instruct state troopers to serve them, Slemp noted. Also, the governor has the option to request that the state attorney general prosecute violations.

Slemp said he personally wears a face mask in all the appropriate settings because he believes he and other people should be considerate of fellow citizens who are concerned about the possibility of getting sick.

While legal enforcement of the governor’s order is a thorny challenge, Slemp wrote in an email: “I urge people to be safe and use their common sense. Show compassion to your neighbors. In particular, if you are often around our older citizens or those at higher risk, I urge you to wash your hands, wear masks, and maintain distance as much as possible. If you are sick, please seek medical attention and do not go to work, a store, or restaurant until the doctor clears you. We all knew these common sense precautions well before any lockdown was imposed and now is not the time to ignore them even if we disagree with the governor’s orders. In Wise County, we’ve never needed the government to tell us how to act for the good of our fellow man. I have faith that we will take care of each other now as we always have.”

Classic cars come to The Laurels

‘Boy, did they rise to the occasion’

Budget has no rate hikes