‘The Gift of Giving’ released by the Napoleon Hill Foundation 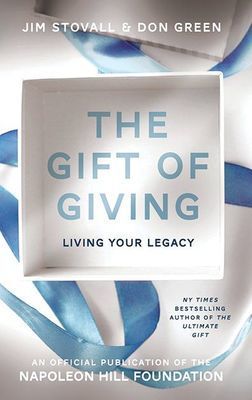 A new publication titled The Gift of Giving, Living Your Legacy, co-authored by Napoleon Hill Foundation CEO, Don M. Green, and Olympic weightlifting champion, Jim Stovall, has just been released. The book, endorsed by the Foundation, traces the giving journeys of Stovall and Green, who have implemented Napoleon Hill’s timeless achievement principles to live a legacy of generosity.

Green, a former bank president, has worked to establish several scholarships at The University of Virginia’s College at Wise during his time as executive director of the Foundation and is responsible for initiating more than two million dollars in endowed gifts and scholarship to the College.

Jim Stovall, a former investment broker has served as President of the Emmy Award-winning Narrative Television Network and has authored more than 40 books, including the bestseller, The Ultimate Gift, which became a major motion picture from 20th Century Fox starring James Garner and Abigail Breslin. For his work in making television accessible to our nation’s 13 million blind and visually impaired people, The President’s Committee on Equal Opportunity selected Jim Stovall as the Entrepreneur of the Year and was also named International Humanitarian of the Year.

The Stovall family’s connection with The Napoleon Hill Foundation began years ago with a friendship between Green and Jim Stovall. The Foundation has since compiled a series of articles written by Jim, in the Wisdom for Winners book series published by Sound Wisdom. Stovall was also the featured speaker for The Napoleon Hill Day in 2016.

“Over the years, Jim and I have become good friends and have wanted to do this project for some time,” said Green. “Jim has been so helpful to the Foundation, and we both recognize the value education has, so all of the proceeds from this book will go to fund college scholarships.”

“The Gift of Giving, which I co-authored with Don Green of The Napoleon Hill Foundation, may be the most important book among the 48 I have authored to date,” said Stovall in his syndicated column. “First and foremost, the privilege of working with Don Green and The Napoleon Hill Foundation is unparalleled. I don’t know of any individual or organization that embodies giving more than Don and the Foundation.”

In The Gift of Giving, Jim Stovall discusses his commitment to finding a driving passion and giving away $1 million to it. He was a broke college student whose dreams of playing in the NFL had been sidelined by a rare condition causing progressive blindness. With the guidance of the successful businessman Lee Braxton and a worn copy of Think and Grow Rich, Jim brought himself from poverty to prosperity and became an award-winning entrepreneur and philanthropist. His journey connected him with Don Green, the executive director of the Napoleon Hill Foundation, who lives out his calling and continues Hill’s work through the Foundation’s many philanthropic efforts. Together, their stories address the rendering of service and charity at every stage of one’s giving journey by identifying opportunities for generosity and taking action on them.

The book, published by Sound Wisdom, is available in paperback and Kindle versions on and at other fine retail bookstores.

Napoleon Hill was born in poverty in a one-room cabin on the Pound River on Oct. 26, 1883.  From these humble beginnings, the Wise County native became an advisor to presidents. During the early 20th century, Hill interviewed the nation’s most successful business leaders, including Andrew Carnegie and Henry Ford.  From those interviews and more conducted over 20 years, Hill compiled his eight-volume set “The Law of Success,” a collection of the philosophy of individual achievement.  He later condensed his research to compile “Think and Grow Rich,” often called one of the most important motivational books ever written.

First published in 1937, “Think and Grow Rich” has sold millions of copies worldwide and continues to appear on the list of top business books.  In this classic on personal achievement, Hill introduced the concept “whatever the mind can conceive and believe the mind can achieve.”  Principles from Hill’s philosophy of personal achievement include cultivating a burning desire, faith, and persistence in the attainment of goals. Hill’s writings are still must-reads for business professionals.

Get your favorite little one ready to learn!

The start of great things to come