‘Boy, did they rise to the occasion’ 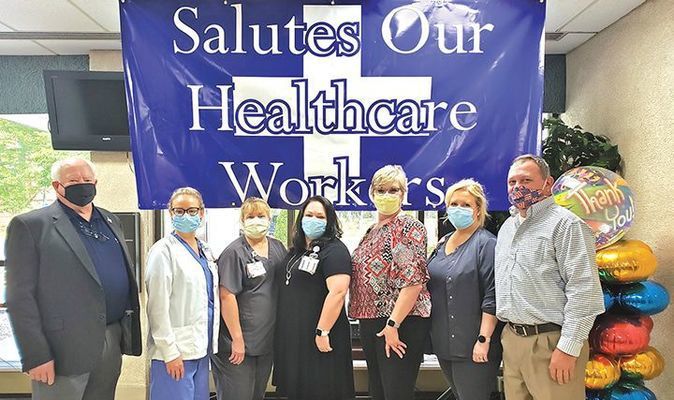 The reception took place June 18 in the hospital’s lobby.

“This is a celebration of health care heroes of Lonesome Pine Hospital,” said Leonard. “When Lonesome Pine was designated as the COVID-19 hospital, they really showed heroism and professionalism for what they do.”

Bonnie Jensen, chief nursing officer at LPH, shared some statistics on how the hospital has functioned during the pandemic. “We really looked at Lonesome Pine Hospital as being the best hospital to service what was coming at us, and boy, did they rise to the occasion.”

According to Jensen, from March until June 18, LPH had completed 341 drive-through tests and had more than 62 persons under investigation (PUI) taken care of at the hospital.

“One thing I want you to realize with the PUIs,” said Jensen, “they may not have tested positive for COVID-19, but all of these people were acutely ill. They were at the highest level of respiratory problems.”

Jensen explained that many of those patients would have been sent to one of the tertiary hospitals, but the hospital staff was able to care for them locally.

Jensen stated that at the time, the hospital had a total of 12 COVID-19 positive patients. “We had one patient that was here for 45 days,” said Jensen. “They walked out of here. We had no patient deaths, zero, which is unheard of.”

Jensen explained that 80 percent of COVID-19 patients who go on ventilators don’t make it.

“The stat that I am most proud of is the stat that says that not one team member here or anywhere in Wise County has tested positive for COVID,” said Jensen.

One big part of the reason why, she stated, is that senior leadership worked hard to make sure staff never ran out of personal protective equipment.

Big Stone Gap Town Manager Stephen Lawson stated that the town and some hospital staff were discussing how to use the armory beside the hospital as a place for hospital staff to stay if they became infected and didn’t want to go home. The next day, after a contracted speech therapist at Heritage Hall tested positive for the virus, LPH was designated as the COVID-19 hospital. Lawson spoke of the town’s apprehension about the decision before realizing that families would want their sick relatives nearby. “It was a great decision.”

He continued, “The people that led that and got that done so quickly, it is amazing that it happened like that and was put together that fast.”

Lawson added: “To hear these stats and hear had it has come from where it was that day to where it is now is more impressive than I could ever tell you. We do a good job at saluting our armed services people, but it’s people like the ones in this room that keep us healthy that we don’t salute as much as we should. It’s times like these that you are our front line.”

Classic cars come to The Laurels

Budget has no rate hikes

Lady Bears take to the track for summer workouts

Ron Short featured at “Lunch on the Lawn” July 17